The Dalginross Bridge crosses the River Earn linking the Perthshire village of Comrie with the community of Dalginross to the south. 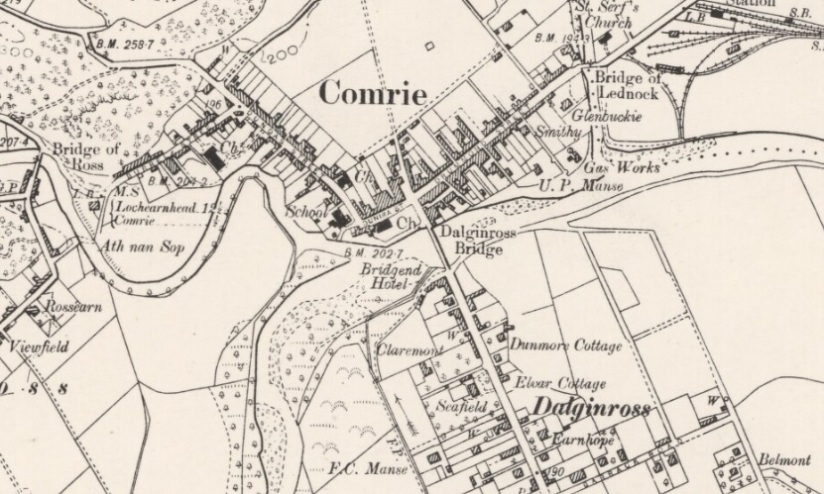 Originally there was a six arched stone bridge on the site, built in 1756.  By 1898 the stone bridge had become unfit for purpose and local residents and businesses were petitioning Perth County Council to have it widened or replaced.  Although the bridge structure was still sound, the steep approaches on either side meant that it was impossible to see if there was oncoming traffic and being only 11 feet 8 inches at its narrowest point made it difficult for carriages to pass on the bridge.  However, it was not until 1903 that the Council agreed that the bridge be replaced,  on the condition that a local contribution of £800 be made towards the estimated £4300 cost.  Colonel David Robertson Williamson, owner of the Lawers Estate near Comrie, came forward promising at least £840 for the construction of the proposed new steel bridge.

The bridge was designed and built by Sir William Arrol & Co Ltd and is a constrained cantilever bridge, the first of its type built in Britain.  Two piers, each 25.5 feet long, 6 feet wide and 10 feet deep, were built on caissons sunk into the riverbed.  These support the cantilever arms of 4 tapered plate girders which carry the roadway across the river. At each shore end a cantilever arm spanning 55 feet is anchored to a sandstone abutment.  The other two cantilever arms meet at the centre with a pendulum joint to allow movement of the bridge and form a central span of 90 feet. Cantilevered footpaths are supported on brackets attached to the external girders on either side and these are topped with wrought iron parapet railings. The overall length of the bridge is 200 feet, constructed with 182 tons of iron and steel. 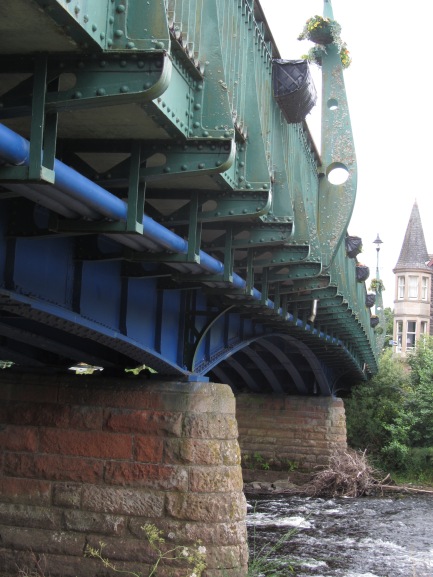 west side of bridge looking south

The new bridge was being built on the same site as the old bridge, and so a temporary service bridge was erected 100 yards downriver, to allow access across the river during construction.  The service bridge only lasted a few months, as heavy rainfall in September 1904 resulted in the river flooding  and the force of the water destroyed the bridge, washing parts of it downriver.  The only way to cross the river after that was on boats with pulleys. Recognising the great inconvenience this caused, Colonel Williamson suggested that as soon as the new bridge was completed and tested it  be opened immediately to the public.  Fortunately the bridge piers, which had only been laid 3 weeks prior to the flooding, had not been significantly damaged and work on construction could proceed quickly.

Once completed, the bridge was tested by driving a traction engine pulling 5 wagons, with a combined weight of 40 tons, across the bridge. On 19 January 1905 the bridge was declared safe and opened to the public.  The final cost of the bridge was £4500.  A plaque on the bridge commemorates the laying of the foundation stone by Colonel Williamson  on 17 August 1904.

Plaque commemorating erection and opening of the bridge in 1905

In 2000 the bridge was refurbished and strengthened to cope with  increased traffic flow, with the insertion of 3 additional steel girders between the originals.  The design by Charles Scott & Partners won a commendation in the 2001 Saltire Civil Engineering Awards in the Conservation Category. 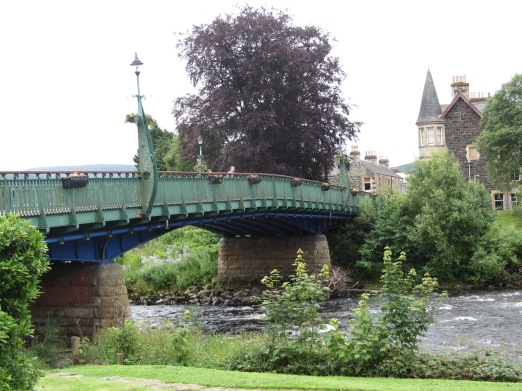