With the opportunity to see some Arrol engineering in action, on 3rd September I headed towards Renfrew to see the span of the Inchinnan Bascule Bridge being raised for Doors Open Days.  It was being raised 3 times during the day at 11am, 1pm and 3pm and I had chosen the earlier time thinking it would be less busy.  Although, a large crowd had already gathered by the time I got there, I was not to be disappointed.  Finding a clear viewing spot I was amazed to see the span of the bridge being raised to an almost vertical position in under 2.5 minutes.

The  bridge is on the outskirts of Renfrew and carries Inchinnan Road across the White Cart River.  When it was built, the site required a moving bridge which would allow the passage of ships from the Paisley docks along the White Cart River to the River Clyde and out to sea, without too much disruption to pedestrians and road traffic crossing the river. 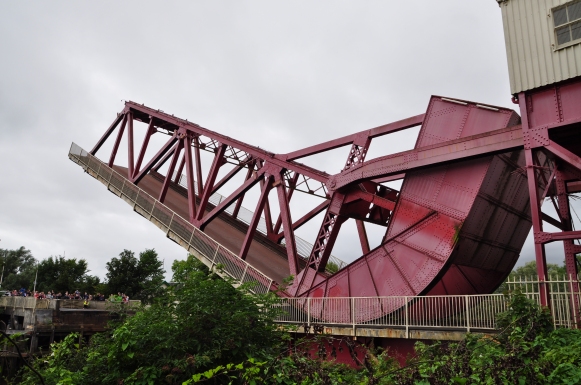 Bascule bridge as it lifts: showing the long span counterbalanced by the weighted block.

It is a Scherzer rolling lift bascule bridge and was designed and built by Sir William Arrol & Company Ltd. in 1923/4.  A bascule bridge is a moving bridge with an extended span at one end counterbalanced with a heavy weight at the other. Because the span is counterbalanced it requires very little energy and little time to raise it upwards into a near vertical position.  The rolling lift design was patented by William Donald Scherzer, an American engineer who wanted to refine the bascule design that was used by Sir William Arrol at Tower Bridge, London.  Instead of having a fixed pivot point taking the weight of the bridge, the rolling bridge has a large radius roller which moves on a track and as it moves position the centre of gravity shifts to the point of contact with the track. To prevent slippage the track has guide blocks which align with matching pockets in the roller. 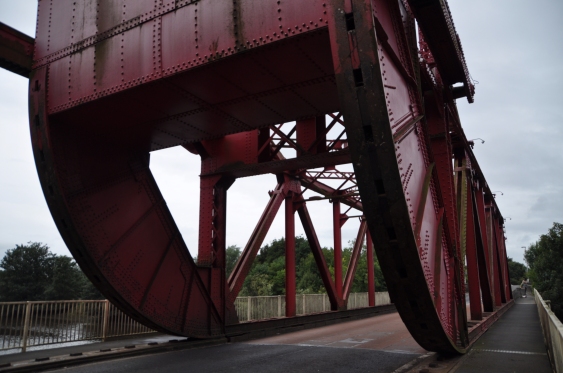 The bridge rollers: showing the holes that follow the blocks on the track. Note the mass of rivets along the edge of the roller where additional steel plates strengthen it.

Other advantages of the design are: 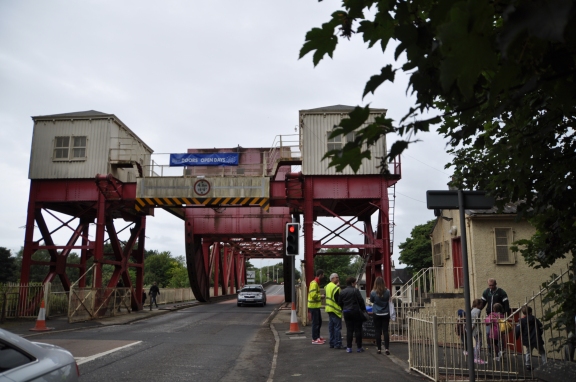 The cabins on towers flanking the bridge contain the lifting mechanism. It is powered by electricity and should the supply fail there is a back-up generator in the outbuilding.

It is the only surviving rolling lift bridge in Scotland and in December 1994 was designated Category A listing. In 2004 Renfrewshire Council commissioned a complete restoration of the bridge and operating mechanism at a cost of over £1million. The works involved repairing parts that had deteriorated, strengthening the structure to carry the increased loads of today’s roads, painting  with a new protective coating and adding architectural lighting.  Although the days of large ships navigating the White Cart are past, the bridge still has to remain operational to allow the passage of large components downriver, from the Doosan Babcock Ltd engineering firm to the sea. It has also become an annual event for Doors Open Days programme in Renfrewshire attracting a large crowd curious to see the bridge in action and relive the memory of a not-quite bygone age.